I thought I would add a post as I have been a little quiet of late. It’s not that I haven’t done anything, there is always something happening… 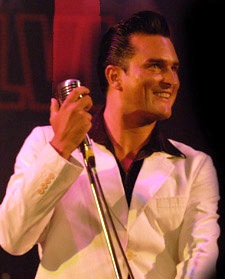 I have recently been to see an Elvis tribute act who is really very like the King himself. His name is Simon Patrick and you might have seen him last year on a BBC programme called The World’s Greatest Elvis . He was invited to audition and made it through to the top 30 out of thousands!! So, you an believe me when I say he is good. His stage name is The Rebel, he’s a regular act at the Stardust in Benidorm and in between visits to Spain and back he gigs in the UK.

Watch out for him in your area, he is definitely worth going to see, if only to ogle his snaky hips 😆 But, joking aside, he is incredibly entertaining and his love for The King is evident as it is easy to see that that he has been heavily inspired by Elvis and is a fitting tribute to his idol.

Aside from going to see The King, I have played a little poker, no results though :-(. Only got near the money, but just short, 3 times !!! You know the scenario, 7 paid and I get 12th place… suppose it goes that way.

On the poker front, there’s a lot of my buddies over in Las Vegas playing in the Main Event of the WSOP. There have been some casualties, but there are quite a few still in so I’m eagerly watching the live updates and funking for them all – Go on you Guys, bring it home … 😀

There’s a few Ideal World Craft shows in the pipeline, so watch this space and I will update with dates and times soon 😀 But, for now, Hina has left the building 😆

There’s a lot in the pipeline so watch this space…